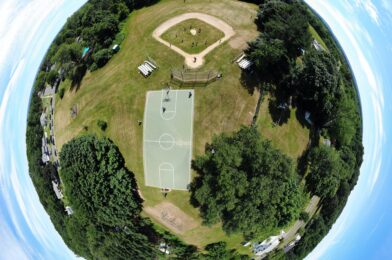 Amy Gaeta uses the relationship between humans and technology, non-military use of drones being a prime example, to rethink concepts of passivity and how it can bring about change. She makes an intervention in science and technology studies from her position in feminist and disability studies, drawing from diverse theoretical sources like the work of Eve Kosofsky Sedgwick, Saidiya Hartman, Alexander Weheliye, and Mark Fisher.

Amy Gaeta is not utopian; she is a student of understanding how we survive a world that is killing us on a dying planet, a feminist disability activist and scholar, poet, punk, and PhD candidate in the English Department at the University of Wisconsin-Madison. Her academic work specializes in the psychological aspects of human-technology relations under the surveillance state. In poetry, she explores mental illness, desire, and the impossibility of being human.

Image: “‘Little Planet’ style edit of a 180-degree panorama of my daughter’s little league game this summer” by Tim Bish.