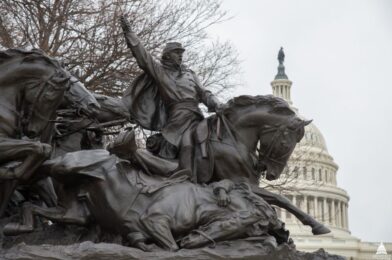 Erin L. Thompson talks about monuments, and their role in American public life. Public art intervenes in directly in politics, shaping social behavior in the present. Monuments, in her account, are a bid for immortality that says “this is how things are” but often means “this is how things should be.”

In the episode she talks about The Houston Museum of African American Culture. They are engaged in a super exciting project reinterpreting the cultural memory of the US Civil War, as the first Black cultural institution that has re-housed a Confederate monument.

If you’re keen on the history and politics of monuments, check out her brand new book: Smashing Statues: The Rise and Fall of America’s Public Monuments. It’s coming out from Norton this Tuesday (Feb 8)! You learn more about the book, and her upcoming talks on her website: artcrimeprof.com

Erin L. Thompson is an associate professor of Art Crime at the John Jay College of Criminal Justice of the City University of New York. Her first book Possession (Yale UP, 2016) studied the history of theft at the heart of private art collections from the Ancient World to the present.

Image: Statue of a man on a horse, part of the the Ulysses S. Grant Memorial at the US Capital, described in this article from the Architect of the Capital, US government website.