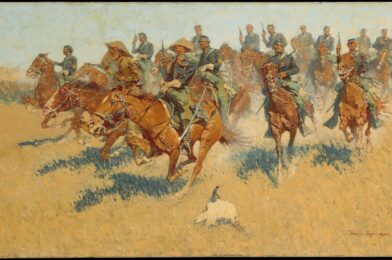 In this episode of High Theory, Kim talks with Saronik about neurasthenia. A disease that no longer exists, neurasthenia was a nineteenth century American epidemic of energy depletion. Thinking about this diagnosis can help us understand the social functions of medical knowledge, and how that knowledge changes over time.

Kim Adams is one of the co-hosts of High Theory. She works as a postdoctoral fellow at the Pennsylvania State University Humanities Institute, where she is writing a book about electricity and the body in American medicine and literature. She also runs a working group on pain management as a cultural process, called Politics of the Prescription Pad. She lives in Rhode Island and has a very large dog named Tag.

This week’s image is a 1907 painting titled “On the Southern Plain” by Frederic Remington. The painting shows soldiers on horseback in the American West. Remington was diagnosed with neurasthenia and treated with the “west cure” (discussed in the episode) by S. Weir Mitchell himself.