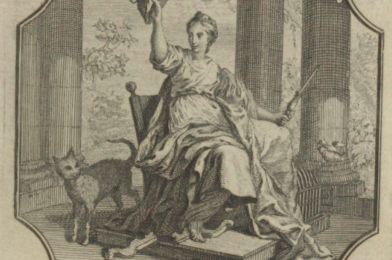 In this episode of High Theory, Leigh Claire La Berge talks about red cats: communist cats, revolutionary tigers, radical felines of all stripes. The red cat is a provocation, and an invitation to think differently about economic history. Leigh Claire continues our spooky theory of cat concepts for Halloween 2022.

Her book Marx for Cats: A Radical Bestiary will be published by Duke University Press this coming summer. It takes seriously the premise that you can tell the history of capitalism through the figure of the cat. As a bestiary, it has a hundred pictures of cats, from a vast archive that spans the ninth century to the present. It began as a series of filmed conversations with cats on Marxist theory.  You can watch them at marxforcats.com

In the episode she references The Social Contract by Jean Jacques Rousseau. Each of the two cover images from the initial publication depict cats.  One of them forms the cover image for this episode. In the longer conversation, she referenced Kate Evans’s Red Rosa: A Graphic Biography of Rosa Luxemburg (Verso 2015) and Drew Pendergrass and Troy Vettese’s Half-Earth Socialism: A Plan to Save the Future from Extinction, Climate Change and Pandemics (Verso, 2022).

Leigh Claire La Berge is an Associate Professor of English at BMCC CUNY, where she studies the intersection of contemporary cultural production and economic forms. Her prior books include Scandals and Abstraction: Financial Fiction of the Long 1980s (Oxford, 2014) and Wages Against Artwork: Decommodified Labor and the Claims of Socially Engaged Art (Duke, 2019).