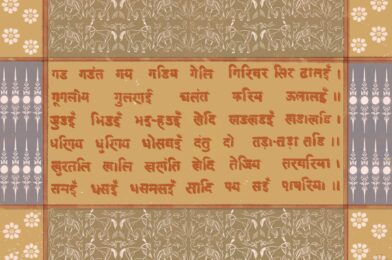 Abhishek Avtans talks about the apabhraṃśa, a word that refers to the middle stage of the Indo-Aryan languages, crucial links between ancient languages like Sanskrit, and modern South Asian languages such as Hindi, Bangla, Bhojpuri, Punjabi, Marathi, Nepali, and others. The first mention of apabhraṃśas is in Mahabhasya, a 2nd century BCE text by Patanjali, where the author refers to languages considered deviations from Sanskrit. However, research into apabhraṃśas, for the same reason, has become crucial in dispelling notions of linguistic purity and politics that is dependent on these notions.

Abhishek Avtans is a lecturer of Indic language/s at Leiden University in the Netherlands. He
loves to work on literature and linguistics of languages spoken in south Asia. He has contributed
in making dictionaries of Great Andamanese, Bhojpuri and Brajbhasha. He writes a column
Dialectical for the Himal SouthAsian Magazine. He tweets at @avtansa.

(the stanza of verse in the image comes from the text of Bāhubalī rāsa by 13th Century AD Jain poet Shalibhadra Suri, it is an onomatopoeic stanza that describes the activities done by elephants, soldiers and horses.)